In the game Detroit: Become Human you will rediscover mankind. Travel to the Detroit of the future, a city full of androids, the technological advancement of the future. In this game you can become one of three androids. You decide on the direction of the story of Detroit: Become Human, just like the gameplay of the previous games of developer Quantic Dream (Heavy Rain and Beyond Two Souls).

What makes a human “a human”?

In the year 2038 the city of Detroit is full of androids that primarily have one function, which is serving mankind. Soon the first cracks of a society run by humans and androids become apparent, because the androids are treated like slaves, and because of that the future of the androids is becoming doubtful.

In Detroit: Become Human you will emerge yourself in a world in which three different android characters see how their world slowly becomes a chaotic dystopia. The choices you make are of great importance to the story. Detroit: Become Human has thousands of different big and small story changes that all lead up to different finales, which means that this game has huge replay value. You are the one that decides the destinies of all the characters, and the city of Detroit as a whole.

Play your own part in the story

Detroit: Become Human illustrates a world in which android slaves have taken over a city, but they develop themselves in creatures that are able to show human emotions, and thus they want to change the world for the better. The androids are going to be faced with elaborate psychological dilemmas, and you will have to take great decisions in order to save the game world you star in.

Discover what it means “to be human”, but from the perspective of an android; see your world as a machine would see it. 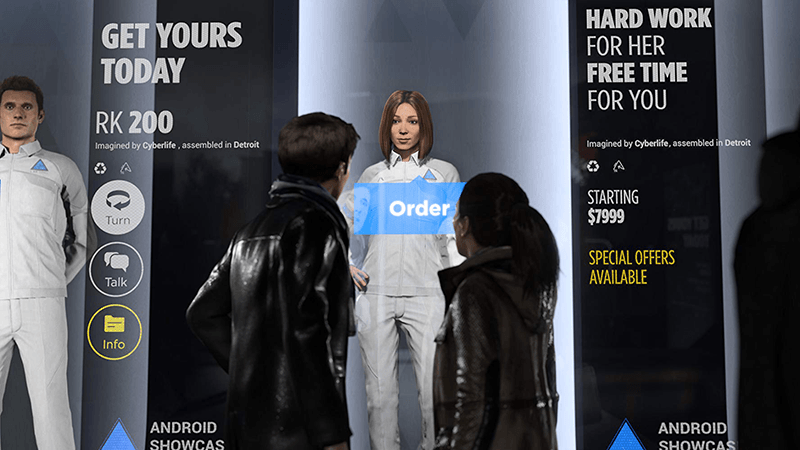 Your choices determine the lives of the game characters

In this hugely elaborate game there are many different storylines. You are not only responsible for the destiny of the three main android characters, but you will also make decisions to decide the faith of the city of Detroit.

The names of the androids are Kara, Connor and Markus, and in some of the storylines they have to make the ultimate sacrifice to save their kind, and the city of Detroit, but sometimes the end is only the beginning…