A small team in Stockholm, Sweden has designed a new Minecraft game. Inspired by their love for classic dungeon crawler games, the Minecraft universe has gained a new game genre. Grab your torch and diamond sword; we are going to explore Minecraft Dungeons.

What is Minecraft Dungeons?

Minecraft Dungeons is a brand new action-adventure game inspired by the classic dungeon crawler games, in which you constantly discover new weapons and items that will help you to defeat the ruthless swarm of enemies. You'll fight in canyons, mines, swamps and forests. You can work together with friends up to 4 players, fighting enemies in varied levels, each with their own complex challenges. It's up to you to save the villagers from the evil Arch-Illager who has set his mind to become the new ruler.

There is no mining or crafting in Minecraft Dungeons. But the Minecraft theme makes somehow perfect sense as a dungeon crawler game: it's aesthetically pleasing and instantly recognizable. You may not be able to remove walls with your pickaxe, but there are so many character skills and builds that it becomes simply unnecessary to destroy or build with blocks. The loot-system is random each player gets his items assigned to based on colour. So don't worry about that one friend who keeps all the good items for himself! Of course, the bigger and stronger the enemy, the better the loot will be. 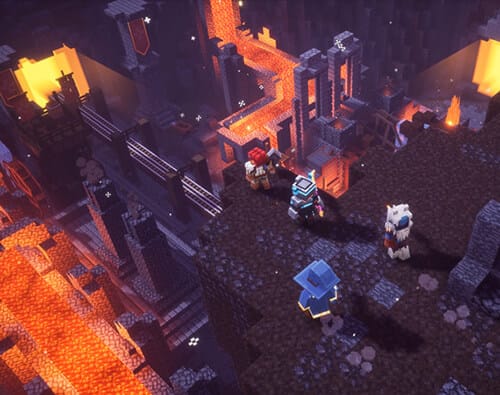 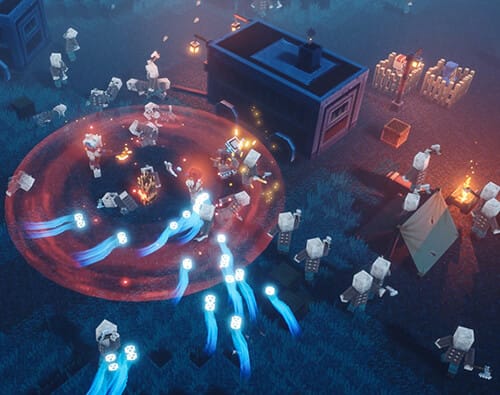 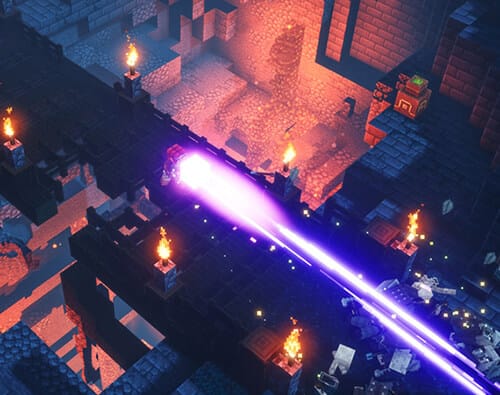 There is no class-system in Minecraft Dungeons, only the ability to customize your character by choosing armor and weapons to build your own build.

It's useful to know that you can open the map while playing, to get an idea how big the level is, the map-display is very minimalistic so it doesn't disturb while playing. You can roll to dodge enemies or avoid traps, summon a pet to help you fight when battle become tougher, drink health potions to stay alive! Gradually you'll encounter stronger enemies, the spiders and zombies will make way for mini bosses who also have abilities that make your life miserable. A flying fire-breathing Imp or wizards with magical lasers, your opponent is not going to make it easy for you to reach your end goal.

In the game there is a Hub Camp, over time you unlock more and more merchants where you can spend all your hard earned emeralds on new items or gear such as enchanted swords, bows, artifacts and armor.


*Minecraft Dungeons is available on the PlayStation 4, Xbox One and Nintendo Switch. If you feel like this game is worth playing, consider getting a gift card to buy the game right away from the Xbox Store, PlayStation Store, Nintendo eShop. Check our product range for PlayStation, Nintendo and Xbox here.
Back to overview