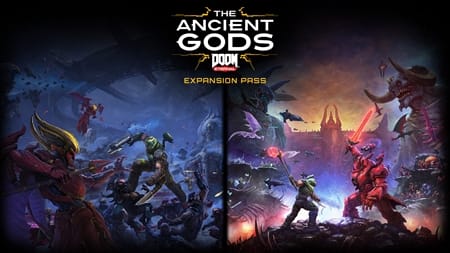 DOOM Eternal: The Ancient Gods Expansion Pass is now available online at the one-stop gift card shop. You can choose from different payment methods to pay for this Nintendo DLC.

The code will be sent to you via email. DOOM Eternal: The Ancient Gods DLC is available as a download code for your Nintendo console.

Once you have downloaded the DLC, DOOM Eternal: The Ancient Gods - Expansion Pass will be added to your Nintendo account. Purchase the DLC for DOOM Eternal online at Gamecardsdirect, the one-stop gift card shop and receive the digital code right into your mailbox! The extra content will be sent as a digital code to your email address. Redeem the code directly via the Nintendo eShop.

To redeem the DOOM Eternal: The Ancient Gods Expansion Pass download code, go to the Nintendo eShop and select “Redeem Code”. Once redeemed, the extra content will be downloaded and added to your account.

The Expansion Pass contains content for the full game DOOM Eternal. After you vanquished the Icon of Sin and put a halt to Hell’s invasion, the Doom Slayer realised that there are consequences to his actions. The death of Khan Maykr and Hell’s conquest of Urdak gave the demons the opportunity to dominate over every dimension and start a new invasion to take over Earth. Together with Samuel Hayden and ARC scientists, the Doom Slayer goes on a quest to find and free the Seraphim. Alas, not everything goes as planned...

Each game has its own genre(s). That way you know what to expect from the game. DOOM Eternal: The Ancient Gods is a Shooter game, PEGI 18.

Bethesda’s DOOM Eternal is being published by Nintendo and available as downloadable content in the Nintendo eShop. You will need the full game DOOM Eternal to play this add-on.

You pulled humanity back from the edge of extinction, but it came at a cost, leaving an imbalance of power in the cosmos that threatens all of creation. The soul of the universe hangs in the balance.

The Ancient Gods - Part One

The legions of Hell have razed the heavens, threatening to expand across dimensions. Battle your way back to Urdak and decide the fate of the cosmos. Your mission is now your own.

Defy the gods and awaken an ancient evil in the epic conclusions to the DOOM Slayer’s saga. Rally the scattered Sentinel armies, lay siege to the last bastion of Hell, break through the fortress walls and face the Dark Lord himself.