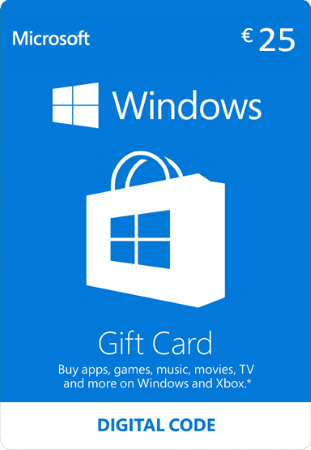 What is a Windows Gift Card?

A Windows Gift Card is a gift card to use as a currency on Windows, Windows Phone and in the Xbox Games Store. You redeem a Windows Gift Card in the Xbox Games Store to purchases i.e. games or Xbox Live Gold, but also in the Microsoft Store to purchase apps, games, movies, series and music. This gift card is suitable to use in Windows 10, Xbox 360 and Xbox One.

How can I redeem my €25 Windows Gift Card store credit?

Redeeming a Windows Gift Card is easy and fast, but is different per device. Please find the redeem instructions for Windows 10, Xbox 360 and Xbox One:

Step 1 - Turn on your Xbox 360 and log in;
Step 2 - Scroll to the end of the list to Settings;
Step 3 - Select Account in the bottom left corner;
Step 4 - Under Your billing options, select Redeem Code;
Step 5 - Enter the 25-digit code and continue. Confirm your decision and your new credit of 25 euro will be available to use in the Xbox Games Store!

Step 1 - Log in to your Xbox One and make sure you have an internet connection;
Step 2 - Go to the Xbox Games Store by scrolling to the right tab Store;
Step 3 - Select Browse all games and then Use a code on the right;
Step 4 - Enter your registration code manually and enter. Your €25 euro Windows Gift Card is now exchanged for store credit to spend in the Xbox Games Store!

Buy and download apps, games, and more from Windows Store on your Windows 8.1 PC, your Windows Phone 8, or from select Xbox stores. With over 100,000 apps to choose from, there's something for everyone. Plus, this gift card never expires, so you can use it whenever you want.
Not redeemable on earlier versions of Windows and Windows Phone. Windows 8 users: Update to Windows 8.1 for free through the Windows Store. The full card value will be applied to your Microsoft account and may be used for eligible purchases (exclusions apply) made directly at select Microsoft online stores. Geography limitations and balance restrictions apply. Eligible purchases and prices may vary by region, device, and over time. NO EXPIRATION DATE OR SERVICE FEES. Taxes may apply. Internet access (connect time charges may apply) and a Microsoft account are required. To create a new account, visit https://commerce.microsoft.com. Xbox Live required to redeem on console. Original Xbox excluded. Paid subscriptions required for some content. You must be 13+. Except as required by law, cards cannot be redeemed or exchanged for cash and are not reloadable or refundable. Microsoft is not responsible if your card is lost, stolen, destroyed, or used without permission. Subject to full terms and conditions and country restrictions, which may change without notice. Void where prohibited or restricted by law. Cards issued by and ©/™/® Microsoft Corp., a Washington Corporation, and/or its affiliates.