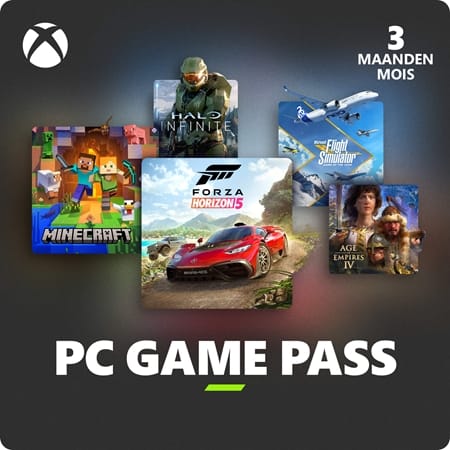 Use your active PC Game Pass membership to play PC games on any Windows 10 PC (excluded are Windows 10 in S mode and ARM devices).

Play more than 100 PC games on Windows 10. The PC Game Pass catalogue includes iconic Bethesda games, new day-one-titles and EA Play games. Microsoft continues to add new games to the catalogue, so be sure to regularly check the catalogue. Make sure to get the latest Xbox app for Windows 10. The app makes it easier than ever to explore available games for Game Pass PC.

By purchasing the Game Pass for PC at Gamecardsdirect, you will benefit from the following:

Receive your PC Game Pass in your mailbox

EA Play is now included in your PC Game Pass subscription. With EA Play, members receive access to the catalogue of the best EA titles, exclusive in-game rewards and early bird trial versions of selected titles. Members can access the EA Play on Windows 10 via the Xbox app and EA Desktop (Beta). Please note that Xbox Game Pass for Console does not include EA Play.

Do you want to have access to everything and everywhere, both console and PC? Check out our Game Pass Ultimate subscriptions.

If you’re an Xbox Game Pass Ultimate or PC Game Pass member, you will need to link your EA and Xbox accounts, and make sure you have EA Desktop (Beta) installed on your PC. If you don’t, the Xbox app on Windows 10 will walk you through the setup process. Once completed, you’ll be able to browse the EA Play catalogue and download games through the Xbox app on Windows 10 via EA Desktop (Beta).

Play more than 100 great PC games on Windows 10, for a low monthly price, with Game Pass for PC. Use the Xbox app on PC to download and play games the same day they're released, like Halo Infinite, plus PC favorites including Age of Empires 4 (coming soon) and Microsoft Flight Simulator. Receive exclusive member discounts and deals on select games and game add-ons in the Game Pass for PC library. With a huge variety of PC games of every genre and new titles constantly emerging, there's something for everyone.
We are here for you Contact
PC Game Pass - 3 Months €29,99
Add to cart
Menu
0
Country Language